Far from the crowds and the usual archaeological sights and main cities, Sicily still reserves any number of hidden treasures. Smaller towns offering exceptional panoramic views and some of the most beautiful baroque architecture in the world, islands with an unusual history, amazing natural sights and other hidden gems. – See more at: http://slowitaly.yourguidetoitaly.com/2012/04/secret-and-unusual-sicily-10-towns-and-sights-off-the-beaten-path/#sthash.DINyYsp0.dpuf

Mozia, also written Mozzia or Motya, is a small island with a very ancient history, situated in the Stagnone Lagoon in the province of Trapani. It is of particular archaeological interest, as it is the most important Phoenician settlement in the Mediterranean. The island was discovered by Mr. J. Whitaker in 1888, who started excavations searching for traces of the early settlers in Sicily. Today, the name Whitaker is mostly associated with the Whitaker foundation and wine-exporting company, famous for its Marsala wines. Whitaker’s 1921 book, Motya – A Phoenician Colony in Sicily, recounts his excavations. 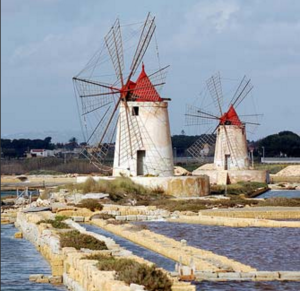 Wind mills on the shore by Mozia, locally known as ‘Mulinu a stidda’. Photo: Rosino.

One of the famous sights of Mozia are its picturesque windmills, which were used to pump seawater into evaporation ponds, to make salt. The water would then evaporate under the effect of the searing temperatures and arid winds. 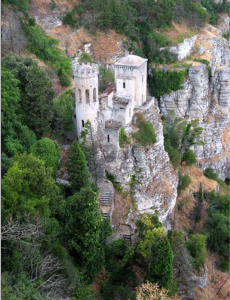 The town of Erice occupies a wonderful setting almost vertically above the sea at 750m/2460ft. Built by the Normans in the 12C, the Castello di Venere (Castle of Venus) was built on top of a rock on Monte Erice (Eryx hill), on the site of the Temple of Venus. It is from the Greek hero’s name, Eryx, that the town Erice derives its name. In Antiquity, the ancient Temple of Venus was very famous throughout the Mediterranean. The Pepoli Castle, dating from Saracen times, is located below. Stones from the ancient Temple of Venus were used to built the 14C Chiesa Matrice. The town center contains remains of ancient Elymian and Phoenician walls. 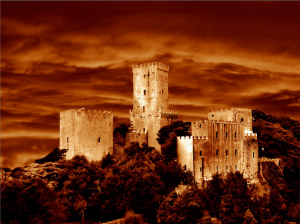 Situated below the slopes of the Etna, the Alcantara river canyon was formed by the erosional process of the Alcantara river on lava flows dating from an eruption in prehistoric times. Guided walks are organized and visitors can wade along the river bed (rubber boots can be hired) or follow marked trails through the impressive natural scenery. The unique natural environment can also be admired from the top, which can be reached on foot or by lift. 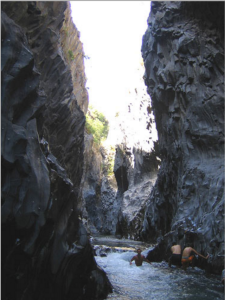 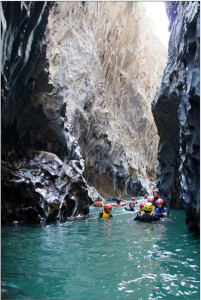 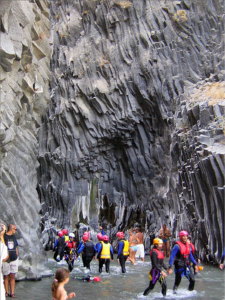 Modica actually consists of three towns: Modica Alta, the medieval town, Modica Bassa, the elegant town of the 1800-1900s and Modica Sorda, the modern part of the town with malls and modern buildings. The town boasts some of the most beautiful, Sicilian baroque architecture in Sicily. 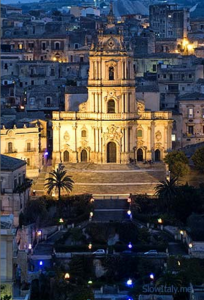 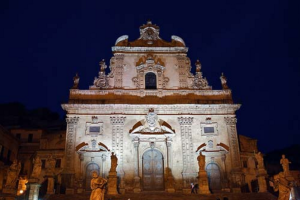 The town is famous for its chocolate, produced according to a special recipe that is said to date back to the 1500s, descending directly from the Aztec tradition brought to Sicily by the Spaniards. See: Italian towns for chocolate lovers. 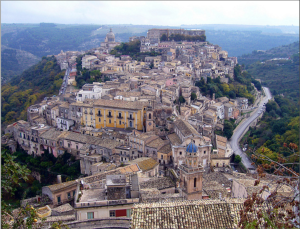 Several sights and monuments of Ragusa Ibla are featured in the Montalbano television series. See: In the footsteps of Inspector Montalbano.

Dominating the Conca d’Oro (Golden Basin) of Palermo, Monreale developed around the famous Benedictine abbey founded in the 12C by the Norman King William II. 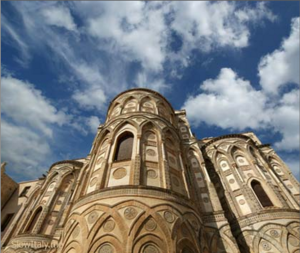 The Cathedral of Monreale is one of the greatest extant examples of Norman architecture in the world. Its oven vaults and walls are adorned with its wonderful 12C and 13C mosaics. Besides, the Duomo, the Ascent to the terraces and Chiastro are also worth a detour. 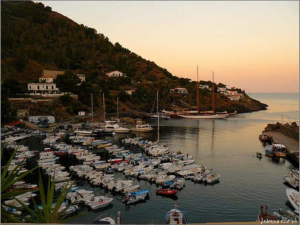 The small volcanic island of Ustica boasts beautiful bays, inlets and caves. One the characteristic features of the island is that the houses facades are covered with artistic murals, trompe-l’oeils and tiles depicting local scenes, portraits, and fanciful compositions. The island is a favorite destination among scuba divers. To preserve the fauna and natural marine environment around Ustica the area was declared Marine Protected Area (MPA) in 1987. 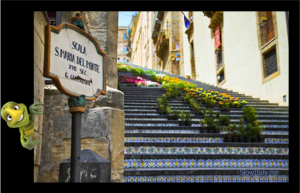 Caltagirone is famous for its ceramics that adorn and enhance balconies, bridges, streets and the façades of the aristocratic palaces lining Via Roma in the town’s centre. The famous Scala di Santa Maria del Monte, a flight of 142 steps covered with enameled ceramic tiles is a highlight of the town. Each year, during the Scala Infiorita festival in May the steps are covered with flower pots. In Summer, on July 24 and 25, the steps are decorated with lanterns to celebrate the town’s patron saint San Giacomo. The view of the illuminated staircase offer an enchanting and charming spectacle at night. The town has been known for its ceramics since the Arab period in the 9th to 11th centuries. Read more: Caltagirone, the colorful capital of ceramics.

Nicknamed the ‘Belvedere of Sicily‘, Enna is located at the center of the island at an altitude of 942m/3090ft. Famous sights include the medieval Castello di Lombadia, one of the most impressive of Sicily, offering an exceptional panorama of the Etna and most of Sicily’s mountain peaks. Also worth seeing are the Torre di Federico and the Duomo. 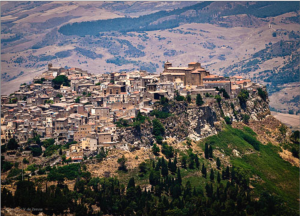 The Catacombe dei cappuccini consists of 8000 mummies placed here from 17C to 19C, which have been impressively well preserved due to the very dry air. Originally the catacombs were intended as a burial place for friars, but with the time prominent people also came to be buried there. The last burials date from the 1920s. A two-year-old little girl was also buried here, the only one that was not mummified, but embalmsed using a special procedure, with left here virtually intact, as if she were asleep. 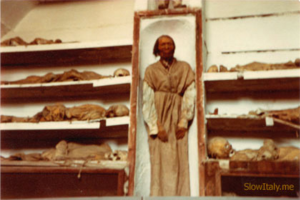