Quiet, cultured, and ever-so-slightly rough around the edges, the Cilento Coast may not have the polish of its Amalfi neighbour—but that, Maria Shollenbarger discovers, is precisely its allure. 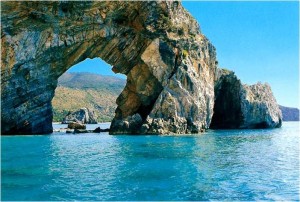 I’m riding shotgun in a BMW X5 that’s barreling down a coastal dirt road in southern Campania; at the wheel is Angelo Granito Pignatelli, the 13th prince of Belmonte. On one side, wheat-coloured bluffs ascend to the deep-blue summer sky; on the other, the still Mediterranean glitters. My boyfriend and I are staying at Palazzo Belmonte, the prince’s hotel (and primary residence) in the town of Santa Maria di Castellabate, and we left right after breakfast to explore a sprawling parcel of land he owns on Punta Licosa, a forested promontory some three miles to the south. The 400 acres of hills, sloping uniformly down to alternating beaches of white powder and quartz-studded sandstone, are home to a handful of abandoned stone farmhouses; beyond that, they’re undeveloped—the only visible inhabitants are the peregrine falcons suspended above, in air suffused with the pungent scents of Aleppo pines, carob trees, and the sea.

We’re here because, like all of Palazzo Belmonte’s guests (mostly British, mostly posh, many of whom address the Prince of Belmonte as “Angelo”), we enjoy access to this private estate; we can swim, picnic, run or walk on its miles of paths, and sunbathe in near-total solitude. We’re also here because the prince, whose faultlessly correct bearing is leavened by a sudden and contagious laugh, harbours a proud, protective fondness for this pristine corner of his world, which he is eager to share with his guests. When you stop to consider, in the silence among the centuries-old trees, that the jammed lanes and cacophonous piazze of the Amalfi Coast are just 45 miles north, you understand why. 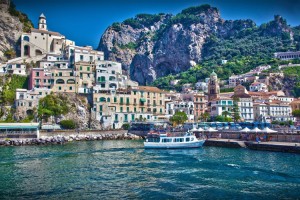 To call the Cilento Coast the anti-Amalfi isn’t much of an exaggeration. This portion of Campania that extends from the bottom of the Gulf of Salerno to the border of Basilicata, 65 miles to the south, lacks almost entirely the manicured glamour, scene-y restaurants and starry hotels, and canny service orientation of its counterpart across the Gulf (Belmonte’s stylishly old-school hotel, which opened to guests in 1985, is the exception). And while the Amalfi Coast’s picturesqueness is manifest in a set-designed sort of way—you have to work pretty hard to find a truly ugly view—the Cilento’s is more erratic. As we spent our days cruising up and down Route 267, the two-lane road that follows the coast, we passed through sleepy port towns and villages, drove parallel to empty beaches for miles, and meandered along the crests of Big Sur–like mountains, far above water the color of sapphire, opal, and jade. But we also took in abandoned building sites, slapdash concrete apartment complexes, and beachside lots lined with Winnebagos and Hymer Vans. (The Italian working classes descend on the Cilento during the ferragosto holiday in the middle of August, when it becomes fantastically overcrowded and, arguably, worth avoiding—something which, for that matter, is also said of the Amalfi Coast.) Here, in poverty- and corruption-ravaged southern Campania, these unlovely blips on the lovely landscape are as authentic—to reclaim a much-exploited travel buzzword—as the region’s delicate mozzarella and plaintive folk music. But if you’re the sort of traveler who can take the blips in stride, not to mention a pronounced dearth of designer boutiques and yacht slips, you’ll be rewarded with a piece of southern Italy that has remained truer to its origins for its lack of a high profile.

Start with the sea. The water here is some of the cleanest in Italy, thanks to the marine reserves that dot the coastline (for anyone who’s watched empty Marlboro packs bobbing in the tide below their $900-a-night hotel room in Positano, that might be reason enough to visit). Cilentan villages are some of the most historically intact and culturally unchanged in the Mezzogiorno: Acciaroli, a half-hour down the coast from Punta Licosa, has coloured stone houses with blue-painted doors, and a harbour dotted with cafés where you and your party might, even in summer, be the only non-native Italian speakers, as we were one bustling Saturday morning. Ernest Hemingway lived here in the 1950’s; he is said to have taken as much inspiration for The Old Man and the Sea from the sun-worn Acciaroli fishermen—many of whom still put out in their wooden boats at dawn each day with their menaiche, traditional handwoven nets—as he did from his later days in Cuba. The medieval fortress town of Castellabate, labyrinthine and haunted-feeling, even during the crowded apex of August, is a UNESCO World Heritage site. Clinging fiercely to a rocky outcropping, its castle was erected to monitor seas that were variously controlled over the centuries by Normans, pirates, and the Saracens. Far to the south, near the border with Basilicata, we took wild switchbacks up the face of a virtual cliff and through the minuscule hamlet of Lentiscosa, where the road narrows to perhaps 10 feet as one passes in little more than a blink through the ancient town centre: four silent blocks shaded by crumbling Baroque palazzi and populated by men who stop their card-playing to stare as you drive by. 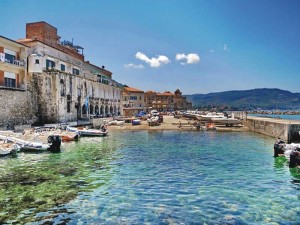 What the Cilento lacks in flash it makes up for in provenance: 2,700 years ago, this area was a seat of Magna Graecia, and it’s replete with pre-Christian mythology. Paestum, on the Sele Plain a few miles north of Palazzo Belmonte, is the site of some of the best-preserved Greek temples on the Mediterranean, and the Sele itself has been known as the piana degli dei, or “plain of the gods,” for millennia; Punta Licosa is the apocryphal site of the siren Leucosia’s suicide (she threw herself off a cliff to her death after failing to lure Odysseus to his). And, this being Italy, there is of course a local gastronomic heritage; its cornerstones are the venerated mozzarella di bufala campana (which has earned Italy’s coveted Denominazione d’Origine Protetta status; State Route 18, running through the fattoria-studded southern end of the Sele Plain, is known as the “mozzarella highway”) and fichi bianchi dottati, the succulent lime-size white figs that grow in the hills around Mount Stella. And there are others: tiny red Paestum artichokes; cured soppressata from Gioi;cacioricotta caprino, the tangy local goat’s-milk ricotta. You’re just as likely to find them—along with a staggering seafood catch (unpolluted water plus strict fishing regulations equals a delicious, usually 100 percent organic selection)—at homey U’ Mazzeno, the colourful osteria on the dirt road that leads to Punta Licosa, as you are on the garden terrace at Ristorante Il Caicco, suspended almost a thousand feet above the sea in Castellabate.

Natural bounty, slow food; on second thought, how is it this place isn’t overrun with self-professed Italophiles—with or without the Winnebago-packed campgrounds?Perhaps it’s only a matter of time; indeed, the prince confesses to thoughts of constructing a luxurious, Masai Mara–style tented camp on his 400 acres sometime in the next couple of years, confident that there are enough nature-loving, forward-thinking Brits and Americans ready to venture south of Salerno to experience a slice of his heaven. 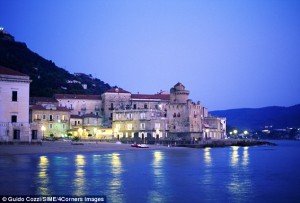 In the meantime, Palazzo Belmonte is no longer the only nice place in the area to rest your head. Ensconced in the hills above Paestum is Il Cannito, a four-room bed-and-breakfast opened in 2006 by Anna Maria Barlotti Gorga, a fiftysomething chef from the area. Spread across two houses dating back to the 13th century, Il Cannito is stamped with that brand of pared-down, old-meets-new chic that graces the pages of glossy 12-pound Italian shelter magazines. The rough-hewn beams are whitewashed; contemporary paintings and flat-screen televisions hang on the walls; the bathrooms are stocked with locally produced fig-scented toiletries in elegant little bottles. Wide terraces of bone-colored travertine are shaded by 300-year-old oaks, spotlit from below in the evening. With the help of her preternaturally healthy-looking children, Santa, 29, and twins Antonella and Nicola, 25, Anna Maria serves dinner (fresh spaghetti in spicy clam broth, baked sea bream) from her sleek professional kitchen, separated from the dining area by electronic sliding glass doors fitted into the centuries-old walls. During the day, guests are welcome at the Gorgas’ private lido on the beach just beyond the temples at Paestum. There are the requisite spots for campers in the grass parking lot; there are also sun beds, umbrellas, and a thatched-roofed bar and pizzeria with a large wooden deck. The sound system is tuned to reggae or West African music the days we’re there, sipping Coronas or glasses of Falanghina in the late-afternoon sun. We notice white lilies popping up through the sand. It’s a native species, explains Nicola. Yes, the beach would be smoother if they were cleared away, he concurs, but we prefer to let them grow; aren’t they beautiful?

Just up the road is Tenuta Vannulo, which is to mozzarella di bufala a bit what Screaming Eagle and Harlan Estate are to Cabernet Sauvignon: artisanal, scarce, legendary. At 8 a.m., people are already queueing at the doors of the bottega for cheese made just two or three hours earlier. Next door, the café-yogurteria sells yogurt, pudding, ricotta, and gelato, all made with buffalo milk. Vannulo’s proprietor, Antonio Palmieri, dapper in white linen pants and a panama hat, shows us around. The state-of-the-art facilities include massage machinery for the buffalo, who line up placidly for their turn under the rollers (a relaxed cow is a bountiful one, the theory goes). We’re here to see the relais that Antonio and his wife, Caterina, are constructing to host overnight guests—clients, potential clients, friends, and those whose love of real mozzarella has brought them here in pilgrimage. Housed in a small renovated farm building, it consists of two opulent suites. Pompeii red and terra-cotta dominate; Neoclassical antiques are scattered about. The Versace-esque overtones, totally place-appropriate here in Magna Graecia, are quite beautiful. Below the rooms is a tasting cellar, damp and mineral-smelling, with subtle recessed lighting and tables where guests who opt for a private tasting session will be served products prepared especially for the occasion. Chic, quiet, stylish, this little relais could easily be found in the center of Rome. Except that a few miles away are temples that predate most of Rome’s architecture; and you can’t get Vannulo mozzarella di bufala, or Vannulo anything, in a Roman supermarket—or, for that matter, in an Amalfi supermarket.

Returning to Palazzo Belmonte in the evening, we make our way to the outdoor restaurant, positioned on a green lawn overlooking the hotel’s private beach, for an aperitif. Behind us, five acres of palm-shaded gardens stretch to the monumental stone palazzo. They’re tended lovingly, but none too rigorously: profusions of bougainvillea and wisteria ignore the boundaries of their plots; candle-filled terra-cotta pots are scattered with no discernible artifice around the tables and along the dirt paths. The hotel is likewise rakishly elegant—a little world unto itself, from the Smythson stationery in the rooms (embossed in the country-house style with Santa Maria di Castellabate, Salerno) to the creaky antique iron beds and the absence of a sign at the estate gates; there’s just a buzzer labeled Belmonte.

A tall wall separates the grounds from the town of Santa Maria, which is busy and charming in the summer months, with an old-fashioned stone boardwalk, a handful of fine terraced restaurants, and one or two boutiques selling handmade leather sandals and Calypso-style beach wraps. Which is to say, it’s the closest the Cilento gets to more luxurious destinations, like Porto Ercole or Portofino—or Positano, just visible across the gulf, a faintly twinkling constellation in the enveloping twilight.